The Live Naked Idiots are a four-piece sketch show who have been performing on the UK’s comedy circuit for several years, working their way up from being bloody awful to headlining gigs and supporting top-end circuit comics.  Based in Hull, their success in bringing their unique brand of sketch comedy, audience-baiting and musical parodies to the people single-handedly landed the award of 2017 UK City of Culture to Hull.*

The LNI have played everywhere from the Edinburgh Festival to the Manchester Comedy Store to the Monkey Business comedy clubs in London to Scunthorpe.  The LNI can be booked for comedy nights or for private bookings via livenakedidiots@googlemail.com

* this bit may not actually be true. 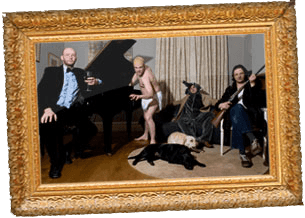 The Live Naked Idiots – a cheeseburger of comedy, slathered in the tomato ketchup of idiocy, with a gherkin of nudity on top.

Like most burgers, the gherkin is usually discarded on the grounds of taste.